Bare It All by Lori Foster 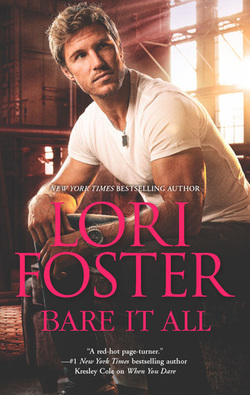 Even though the year is still fresh, I've already read my fair share of books and, I can guarantee, Bare it All stands out in any pile – it is far and away one of the most interesting books I've come across thus far (2013). With well-formed characters and a plot that had me so enraptured, I spent WAY more time reading than I should have.

Alice was what I expected but not, either. She was a sweet and tender (expected) but she was also brave and had a full-steel backbone (semi-unexpected). Reese was an amazing hero – he was possessive, but not overly so, attentive and protective. I loved Alice but, honestly, there were times when I wanted to push her way out of the picture so that Reese would be free for me. It wouldn't work out though, because it was obvious from the start to the end that Reese and Alice were positively made for each other – if their explosive chemistry was anything to go by. I knew Lori Foster had some heat in her but, jeez, the scenes in this one were nearly white-hot.

In the background, we saw more Rowdy (LOTS more Rowdy – yum) and Avery, both of whom I can’t wait to read more of. Rowdy actually seemed as if he wanted to take the hero slot at points, not that I minded one bit – he and Avery will make very beautiful chapters together. We also saw a hint of the future of Lieutenant Peterson and Dash, whom I had strongly suspected would end up together and had mentioned in my review of Run the Risk.

Romances barred, though, the plot was very intriguing and realistic. I’m not usually nearly as invested in the actual mystery as the characters but, in this one, they were both well done – don’t get me wrong, the mystery wasn't way out there but, still.

All in all, Bare it All was a truly wonderful read and I’m bursting for more Love Undercover.

As the person responsible for taking down a brutal human trafficker, Alice Appleton fears retaliation at every turn. No one knows about her past, which is exactly how she prefers it...until the sexy cop next door comes knocking.

Detective Reese Bareden thinks he knows what makes women tick, but his ever-elusive neighbor keeps him guessing like no other. Is his goal to unmask Alice's secrets? Or protect her from a dangerous new threat? One thing is certain: their chemistry is a time bomb waiting to explode. And with no one to trust but each other, Reese and Alice are soon drawn into a deadly maze of corruption, intrigue and desire-and into the line of fire....