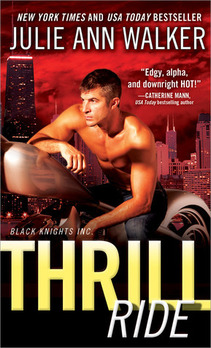 I loved this book! A-mazing addition to the BKI family. I don't know how I could have expected (even subconsciously) anything less than amazing from her, but Thrill Ride was jam-packed with action, adventure and steeaaammmyyy romance (in the hot hot Jungles of Costa Rica, yowza!).
Rock was a pretty amazing hero - he was honorable and emotional when it was called for, but maintained a sexy bad boy swagger, with his cowboy boots and sexayy cajun accent. Just the same, Vanessa was a kick-ass heroine. She was feisty and represented all us females well; vulnerable but strong with a side of bombshell thrown into the mix. The passion between the leads was practically rising from the pages of the book - there was no actual loving until the end, but that didn't lessen the sexual tension one iota.
The plot, as usual, was strong and I enjoyed the whole rogue-op theme that was done in a way that I don't often encounter.The secondary characters were a blast and I cannot, cannot, cannot wait for Bill and Eve.
Great book from Julie Ann Walker and I can't wait for the next BKI or whatever she'll throw out there.

Ex-Navy SEAL Rock Babineaux’s job is to get information, and he’s one of the best in the business. Until something goes horribly wrong and he’s being hunted by his own government. Even his best friends at the covert special-ops organization Black Knights Inc. aren’t sure they can trust him. He thinks he can outrun them all, but his former partner—a curvy bombshell who knows just how to drive him wild—refuses to cut him loose.

She Won't Back Down

Vanessa Cordova hasn’t been the team’s communication specialist
very long, but she knows how to read people—no way is Rock guilty of murder. And she’ll go to hell and back to help him prove it. Sure, the sexy Cajun has his secrets, but there’s no one in the world she’d rather have by her side in a tight spot. Which is good, because they’re about to get very tight…

Hell on Wheels
In Rides Trouble
Rev it Up